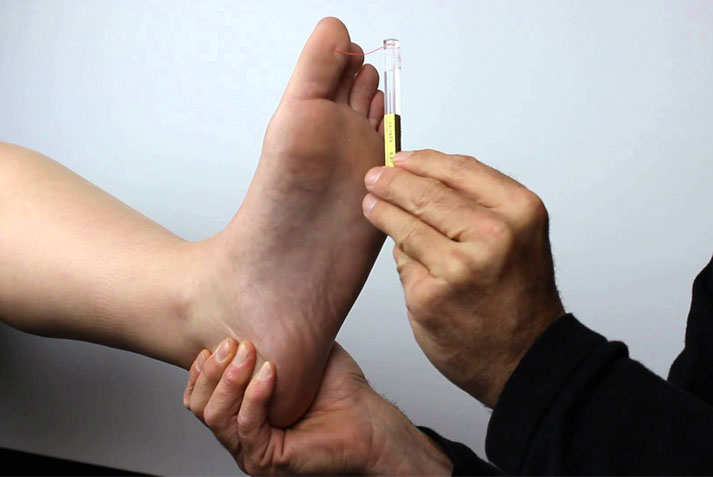 A brief history of monofilament testing

Professor Sidney Weinstein(1922-2010), an American neuropsychologist, together with psychologist Dr Josephine Semmes, developed the instrument originally referred to as the Semmes-Weinstein Pressure Aesthesiometer (SWPA), a calibrated series of nylon monofilaments inspired by the Von-Frey horse-hair instrument which permitted the quantification and classification of sensory loss in brain-injured patients. They used the monofilaments to map cortical areas of the brain in monkeys. The initial publication of normative thresholds in human subjects is found in the book Somatosensory Changes After Penetrating Brain Wounds in Man. When the US DuPont company first invented Nylon it was a fascinating unexplored substance to him. Weinstein recognized its viscoelastic properties as a superior replacement for the progressively sized diameter horsehairs he had been using in sensory threshold testing. Nylon has little humidity absorption, whilst hair has a lot, a criticism of the horsehair test first described by von Frey in the 1980s. Weinstein replaced horsehairs in the von Frey test with Nylon in available diameter sizes, and the test was born. He recognized the value of the progressively increasing threshold test in determining normal and abnormal sensory threshold, and wanted this to be able to be shared. Many scholars were interested in sensory testing during this period. Careful examiners from many fields were attempting to gain a better understanding of human sensory physiology. The original Semmes-Weinstein design is still useful and available to a large variety of clinics that need to do sensibility testing and there is nothing wrong with the original design so long as it is calibrated correctly. Nylon has the same properties today it did originally if it is pure (with no additives that can change the physical properties).

However, the now ubiquitous Semmes-Weinstein monofilament examination (SWME) which employs only a 10g nylon monofilament, was never actually intended to diagnose diabetic peripheral neuropathy and the problem with it in this context is that it is a screening test for large nerve fibre neuropathy using lack of sensation in the feet as a surrogate. It is not, therefore a true test for neuropathy. Monofilament has a relatively high sensitivity for late neuropathy and a somewhat lower specificity but the principal problem with it is that it has a low sensitivity for the detection of early or small fibre neuropathy so it detects late rather than early disease and what is known as the ‘at risk foot’.

The staging of diabetic neuropathy is crucial. The diagnosis of asymptomatic or preclinical neuropathy is essential in order to stop progression to advanced or irreversible stages, and to prevent further complications. Once symptoms appear, there are few effective therapeutic strategies.