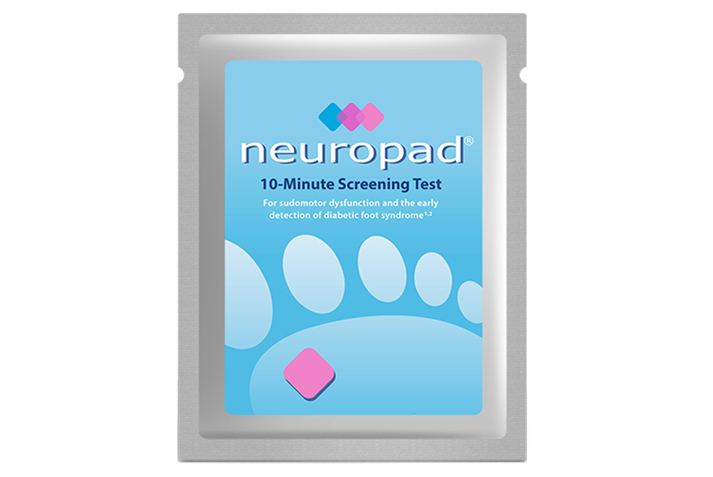 A new study presented at the specialist Diabetic Foot Study Group (DFSG) of the European Association for the Study of Diabetes (EASD) in Stuttgart, Germany, in September 2016 provides further evidence of the high sensitivity that neuropad® has for the prediction of future foot ulceration in people with diabetes.

The prospective study conducted by lead investigator Dr Irene Sanz Corbalán and colleagues enrolled 263 patients consecutively from the Diabetic Foot Unit of the Complutense University of Madrid between July 2011 and April 2015. Diabetic patients without an active foot ulcer were classified by the International Working Group of Diabetic Foot (IWGDF) risk stratification system. Diabetic neuropathy was evaluated according to the results of the Semmes-Weinstein Monofilament (SWM) or Biothesiometer and using the neuropad® sudomotor function test (SFT).

Results showed that 60 (22.8%) patients developed a diabetic foot ulcer (DFU) during a mean follow-up of 41.55 ± 3.5 [35-48] months. 10 (16.7%) patients who were not diagnosed as having diabetic neuropathy by the SWM/Biothesiometer and were classified into the group risk 0 (without risk for developing a foot ulcer) went on to develop a foot ulcer during follow-up. In contrast, all patients who tested positive for sudomotor dysfunction, and despite some having a 0 risk using conventional sensory tests, went on to develop DFU during the follow-up period.

SFT was considered an independent and statistically significant factor in the final Cox regression model of DFU prediction during the follow up [p=0.002; HR: 4.3 (CI: 1.7-11.1)].

The investigators concluded that Neuropad identifies earlier and with greater accuracy patients with diabetes that are at risk of developing DFU compared with the standard neurological sensory tests. The results of this research add to the evidence base that sudomotor function should be included as a risk factor in the classification system for diabetic foot disease because the standard sensory tests under-diagnose the overall risk for ulceration. The study is now in publication.